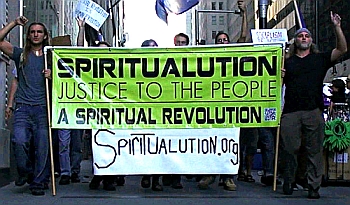 When many people hear the term “activist” they think of people marching in the streets in a protest against something—a war, a political leader, a government’s policies, a company’s policies, and so on. Or they may think of someone who stands on a platform in a street or on a college campus, dramatically speaking out against injustices and wrongdoings done to the masses. Or they may think of impassioned writers whose articles and poetry (rarely published in mainstream media) scream out against terrible things done to all living things. Most people think of an activist taking a strong, outspoken stance against political, social, or environmental atrocities. An activist is all of those things and more.
Activism comes from the root word “act,” which has other derivatives such as: “active,” “action,” and “activate.” All of these words imply some form of movement, usually on the material level. Activity and movement are indeed a part of patterns and systems that are on cosmic as well as microscopic levels, which the more progressive scientists and theologians recognize.

According to The URANTIA Book, there are not just the physical circuits emanating from the center of the Grand Universe, there is also personality-, mind-, and spirit-circuitry. And all of these circuits, and the personalities related to them, coordinate with each other, weaving a wonderful web of divine pattern that encompasses every aspect of reality within the Grand Universe, which includes seven superuniverses and hundreds of thousands of local universes, of which our world is a part.
The universes are seething with cosmic force and power in the modes of creating, evolving, and maintaining. This dynamism is found in space as well as on the billions of worlds inhabiting space. But we also learn of action on other levels—mindal and spiritual.

Now, what does all of this metaphysical stuff have to do with activism on our level here on planet Earth? Everything! The Universal Father, who is known by many names including the First Source and Center or the First Creator, uses personalities to implement His divine pattern in space and on all worlds. Whether we realize it or not, most of us activists—spiritually-oriented or otherwise—are involved in implementing to some degree these patterns and principles on all levels of universe reality—the physical, the mindal, and the spiritual.
Most activists—secular as well as religious—feel in some manner commissioned to be movers and shakers, confronting wrongdoing, stupidity, and injustice in all of their various forms. But in order to be the most effective activists in bringing about long-lasting, beneficial change, our moving and shaking must be within divine mind and within divine pattern—in other words, within divine administration principles.

I think that in order to become the most effective activists for personal, social, political, and environmental sustainability, we must evolve into spiritual activism. We must become active at addressing our own soul and spiritual issues, truly identifying ourselves first as ascending sons and daughters of the Universal Father. If we do not identify with our spiritual selves and actively seek personal change, we will limit ourselves and others within the confines of definitions that enslave us.
All four of my friends could be so much more if they allowed themselves to become spiritual activists in their own personal ascension. One needs to face her bitterness, pride, and selfishness and overcome those traits that cause her and others so much unhappiness. One needs to jump out of his bag of simple complacency and passiveness. Another needs to correct her incorrect ideas about what is the highest way to express her compassion, and the other needs to acknowledge the spiritual reality of existence, which he denies.
I was saddened to see how each one of these persons had fared in their many years of life on this world. After so many years of not seeing them, I realized how apart I had grown from them, and how much I had changed since our college days in the mid 1960s when we all were activists for peace, honest government, just national and international policies, and a clean environment. Though we all still are activists in some manner, my activism has expanded to be more extensive and intensive, more spiritually based.
While visiting with these nonetheless wonderful individuals, I felt so limited in what I could share with them of my own life, of my own growth, of my own understanding of reality, of my own work. With three of them, I just listened, for I knew that they were uncomfortable with what I might say. Only one—the one I had been closest to in our college days and whose art speaks of the spirit within us humans—was willing to share ideas with me and acknowledge me as a spiritual activist. She also was more open to the turns my life had taken and referred to us as “kindred spirits,” though she felt she has gotten stuck in a life that was not fulfilling for her.
When I graduated from college, I pretty much set out on a path that no longer included my college friends, for I moved away from most of them—geographically and philosophically. I never attended reunions or kept in close touch, though for a while I sent annual “catch-up letters” about what was happening in my life—my work and my own internal processes and growth into spiritual activism.
My kindred-spirit friend did indicate that she understood why I chose to become distant from my college days and associates, for I had embarked on work that required many challenges and changes that were not a part of “the good ol’ days” or that form of activism that we practiced in college. She insightfully stated: “You had to leave us all in order to do what you are now doing, didn’t you?”

In order to become spiritual activists—walking into our destiny within our ascension process—we have to leave many people and many things behind. Every day we must continue leaving behind “stuff,” for we have so many ideas, coping mechanisms, habits, attitudes, reactions, and thought patterns that need to be relinquished in order to move forward in our healing, reconciliation, growth, and activism in service to others. In order for us to implement divine administration principles in all areas on the human level, we first must be spiritually active. We can be powerful activists against injustices and wrongness without a spiritual foundation, but we cannot be the most effective, powerful activists for justice and rightness within divine pattern outside of a relationship with the First Creator.
I have embraced the true religion of Jesus—not Christianity but the spiritual teachings of Jesus that actually encompass many wonderful and true principles found in almost every world religion. Though I see myself as a “religionist” and a person who is spiritually-oriented, I do not consider myself a Hindu or Buddhist or Jew or Christian or Muslim, albeit I appreciate much of the philosophy, music, and art of each of those religions and enjoy interacting with others from each of these religions. I appreciate true spirituality wherever I find it, but I abhor false religion based on materialism, politics, selfishness, greed, lust for power, and ignorance.
In a paper entitled “Social Problems of Religion” of The URANTIA Book, there is a statement about the “religion of Jesus” that has little to do with institutionalized Christianity (though there are people within that religion who practice this type of spiritual activism). “The religion of Jesus is the most dynamic influence ever to activate the human race. Jesus shattered tradition, destroyed dogma, and called humankind to the achievement of its highest ideals in time . . . .”1 I think we spiritual activists need to strive for the highest that can be brought out within ourselves as well as within our societies and cultures.
All of us who are passionate about contributing to making this world a much better place—whether spiritually-oriented or not—can identify with the counsel Jesus gave to a young man who was fear-ridden and miserable almost 2,000 years ago, for we too can feel beaten down by life’s circumstances and become discouraged by the apathy of so many people in our own nation.

. . . You are trying to run away from your unhappy self, but it cannot be done. You and your problems of living are real; you cannot escape them as long as you live. But look again, your mind is clear and capable. Your strong body has an intelligent mind to direct it. Set your mind at work to solve its problems; teach your intellect to work for you; refuse longer to be dominated by fear like an unthinking animal. Your mind should be your courageous ally in the solution of your life problems rather than your being, as you have been, its abject fear-slave and bond-servant of depression and defeat. But most valuable of all, your potential of real achievement is the spirit which lives within you, and which will stimulate and inspire your mind to control itself and activate the body if you will release it from the fetters of fear and thus enable your spiritual nature to begin your deliverance from the evils of inaction by the power-presence of living faith. And then, forthwith, will this faith vanquish fear of others by the compelling presence of that new and all-dominating love of your fellows which will so soon fill your soul to overflowing because of the consciousness which has been born in your heart that you are a child of God.2