Dancing to the Rhythm of Refinement

I was blessed to grow up on American Indian Reservations in remote areas of Arizona, thus being able to roam wildlands nearby, experiencing solitude and silence, feeling at home with my own thoughts and emotions within me and the natural environment around me. I intrinsically sensed the universe was well-ordered with an overlying divine pattern and observed this order within my bioregion’s natural systems. At the same time, I saw the disturbances of drought that dried up life, drenching rains that caused destructive floods, wildfires that consumed all in the path of their greedy flames, and the cruelty of predator/prey relationships. My father, who was a lover of nature and a soil and water conservationist by profession, educated me on how these seemingly disorderly events were really part of the ordered system of things, and that fires, floods, and predators were all actually beneficial in maintaining a healthy environment. He also taught me that human interference with the natural order of things created an imbalance in the pattern of ecosystems resulting in disarray and disorder.

As I moved into my pre-teen and teen years, my understanding of reality became much more complex and troubled. It was more difficult to consistently see a pattern of order in anything when I was often such a mess inwardly. I was terribly uncomfortable with my roller-coaster emotions and confused, unclear perceptions. However, I got through these challenging years without getting lost in sexual promiscuity that does so much damage to the self-esteem of a girl or substance abuse that retards emotional and intellectual development of a youth. I came out of that period with a deeper sense of my place in an orderly and loving universe—thanks to the loving presence of parents, teachers, and other adults who acted as elders and spiritual directors for me during those years. Thus, I entered my college years with a more developed sense of being an integral part of the whole of creation and having a sense of responsibility to live my life with compassion, integrity, and morality, giving love and receiving love in a responsible manner.

My university years brought more emotional expansion, increased social connections, and of course a greater expansion of knowledge on many topics, including the “ways of the world.” More significantly was the quantum leap in my own level of spirituality. Naturally, accompanying all of this personal progression was personal upheaval and turmoil.

After experiencing almost five decades of post-college adulthood, my understanding of reality has resulted in that I am very much “at home” wherever I may be in the moment, with whomever I am with and with whatever I am doing. As an “elder”—not only in years but in vocation as a pastor and teacher of spiritual principles—I have evolved and progressed from my periodic phases of emotional tumult, intellectual confusion, and at times chaotic life to a dynamic existence of constant challenges, enriching relationships, meaningful work, intellectual stimulation, and spiritual fulfillment. I still experience some of the emotions that cause “pain,” just less often and to a smaller degree, and within the context of a deep-abiding joy, inner peace, and a sense of assurance.

In my years of searching for “truth” and sense in a world that seemed to lack much sense at times, I have encountered persons, writings, mindal associations, and spiritual experiences that have assisted me in my quest. I have experienced times of great distress and disturbance as well as times of stability and “smooth going.” In retrospect of having experienced my own “dark nights of the soul” and wandering through the maze of emotions in agitation and thoughts of contradiction, I have always come out renewed, changed for the better, and stronger in my convictions to my higher ideals. I have found that often growth and change-for-something-better require a passage through disintegration, which is what Jesus meant when He stated that we need to “die to self in order to be reborn again.”

I have also observed that there are many people whose lives remain in a state of commotion and chaos, never finding themselves and their place in the world. Why is it that so many souls find their place of peace at the end of their lives on this earth, when they are passing on to the next plane, rather than when they have many years of living still left? I think it is because they did not allow for the order that is inherent within chaos to eventually come forth; they did not allow for the divine pattern that is present on all levels of reality to emerge within and around them.

If individuals stay with the tango of turbulence, order will eventually result, as is observed by scientists, sociologists, psychologists, philosophers, and theologians in their areas of study and observation. Whether in the sciences of physics, chemistry, biology, and astronomy, or in the exploration of the evolution of societies, or the study of the depths of the psyche and spiritual experience, it has been discovered that order of some kind will emerge from disorder if the process is at some level evolutional. 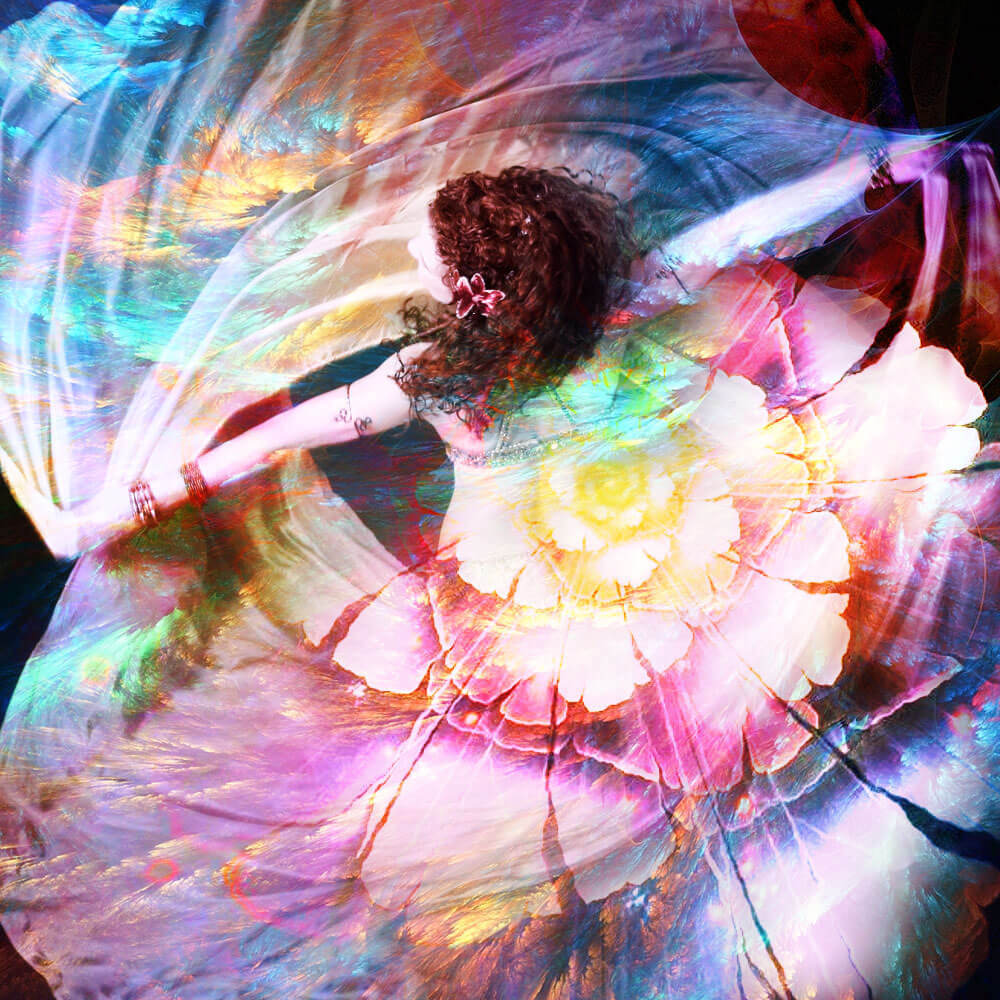 The rule of evolution is to progress into some form of balance and beauty, eventually aligning with the divine pattern that permeates all levels of reality—material, mindal, and spiritual. Note that I emphasized divine, for the pattern I am referring to comes from a divine source, which is often referred to as “God,” who is the First Source and Center for all patterns of beauty and goodness. Scientists who recognize this source behind the physics, chemistry, and biology, etc. of what they observe refer to it as “intelligent design.” Whether in the cosmos, on the earth, in the body of an organism, in the mind of a human, or in socialization between personalities, the innate design will emerge if the presence of spiritual forces are in some form of influence and overcontrol—from formlessness to form, disorder to order, incompleteness to completeness, disease to health, disharmony to harmony, incongruence to congruence, war to peace, fear to assurance, or hatred to love.

On our evolutionary world of imperfection, we see many patterns come forth that are not part of the divine but rather are a part of that which has deviated from the blueprint of the divine and from the living spiritual forces of overcontrol. Many understand these deviations to be caused by the Lucifer Rebellion that occurred 200,000 years ago.1

Regardless of whether individuals acknowledge the fact of the Lucifer Rebellion or not, it is obvious to anyone who has “eyes to see” that there indeed are some things that just don’t evolve but stay stagnant or even devolve. I see the Lucifer Rebellion as a disease, as a deadly virus or cancer that invades a body of living, dynamic, ever-evolving processes and causes chaos and disequilibrium, never evolving into something better and eventually leading to death and nonexistence. This “rebellion” from divine pattern can manifest in the natural world processes as well as within the human psychological makeup and in families, tribes, institutions, societies, nations, and civilizations.

The only way to escape this type of chaos is to literally leave it by jumping into another type of chaos and disequilibrium, one that is part of the evolutionary process that leads to eventual healing and unfoldment into a better state of being. The kind of chaos that is positive is a destructive energy that dissolves the past or the lesser and gives us a gift of a new future and something better. In my own evolutionary process, I have had to make changes that initially caused a sense of agitation and disturbance to my “comfort zones” in order to outgrow habits that were not of divine origin—patterns of thinking, feeling, and doing that slowed down or even prevented further healing and growth. That human process of going through upset, unraveling, and moving into settlement and equilibrium is part of the divine pattern also observed in the vast cosmos where something in chaos and disarray evolves into eventual order and beauty. This same pattern manifests on our world in its natural and human-made systems and can also be observed through a microscope.

The divine pattern of evolution—coming from incompleteness to completeness, from disorder to order, from instability to stability, and so on—encompasses both the linearity of step-by-step building blocks and hierarchies of a chain of command as well as the circularity of “suddenlys” and encircling partnerships; it isn’t one or the other but both. Thus, you see linearity and roundness in all healthy relationships—in natural ecosystems as well as in higher human social systems.

On a personal level, just as a slow-moving, earth-bound caterpillar must become mush within a cocoon it created in order to emerge as a colorful, airborne butterfly that flies and flutters from flower to flower promoting pollination and propagation, so too must an individual allow the cocooned going-within, dark-night-of-the-soul experience that makes mush of our messy muddles of dysfunction and disease in order to be transformed into a person of balance, equilibrium, and high purpose—dancing to God’s pattern and rhythm of refinement into our true and higher selves.

1. For further information on the Lucifer Rebellion, see in The Urantia Book, Papers 53, 54, and 67 as well as The Cosmic Family, Volumes 1 and 2.

This article was first published in the Alternative Voice, Volume XIV, Number 1, with the theme of “Moving Through Chaos to a Divine New Order”.