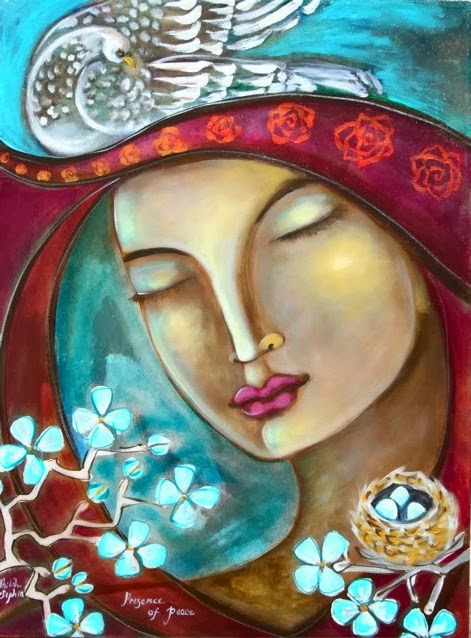 For the first couple of years it was a real struggle to deal with the physical aspects of my aging process, though I liked the psychospiritual maturation that I was experiencing at the same time. Eventually I was able to see how my physical changes were actually a blessing that corresponded with my inner growth.

I am no longer able to daily ride my bike four miles or do long hikes up to fifteen miles, though I can walk up to about two miles. My physical vehicle (body) will not allow me to do as many activities as I have enjoyed in the past, but I realize that I am really healthier than I have ever been in my entire life. I am in a process of healing, and it has nothing to do, right now, with being cured of certain physical symptoms.

I have always been a person who has moved fast through life—parenting six children and working in professions that I loved and felt called to do—first teaching up to 125 students a day when I was in the public school system and then moving on to pastoring and administrating the ever-growing ministries of Global Community Communications Alliance. I moved quickly, and there is a place for moving fast, for we can get a lot of things done. However, God had been trying to get my attention for a long time, because all too often I moved too quickly in my time and not always in God’s time. I even, at times, told God how I thought things should be and what His will should be for me!

So, it was a wonderful thing that happened to me when many years ago I was bed-ridden for about three months. During that time my heart beat very slowly and faintly, as if I had the heart of a small bird. I could not even get up to walk to the bathroom. I heard my heart saying to me, “I am not going to move any faster at this time, and you have to learn to flow with this pace.” There may be partial medical explanations as to why my heart slowed down to the extent that it did, but more important to me are the spiritual reasons. After three months my heart started beating stronger and faster, enabling me to be able to begin living normally again.

I continue to be in my point-of-origin reconstruction process, which is a concept introduced in The Cosmic Family, Volume 2. There are a lot of things happening on many levels, for this is a multi-dimensional process I have been experiencing. It happens first and foremost in my mind and in my spirit, in my heart and soul. The physical manifestations come as I make those inner shifts that I need to make. I had to be slowed down for three months so I could be very present to hear that small quiet voice of God, which really is not very small at all. It is quite loud if you are listening.

Those many years ago, I needed to be forced to sit in a circle of quiet for a lot longer than five minutes, or twenty minutes, or a day. In the circle of quiet that I existed in for those three months—lived in, grew in, unfolded in—I became more and more aware of a deep smoldering anger and resentment that was very much a part of me, though I thought I had gotten a handle on all of that. Being a person who has had past lives, I had chapters and chapters, layers and layers of experiences where, as a woman on Urantia (Earth), I had been beaten down by the fallen situation on the planet. We women have a lot of reasons to be angry, but I am not going to get into all of that at this time. [The Cosmic Family volumes give much information about those who have had past lives on this world, which is but a small number in relation to the almost 7 billion humans here.]

In order for me to heal spiritually, during the three months of quiet and rest, my anger had to be dealt with because anger and resentment must be dispelled or transformed into something productive and helpful. Resentment is simply unexpressed anger, and if not appropriately and effectively expressed, anger can sit deep inside and manifest in some form of physical dis-ease. There was a healing process that had to go on within me, as it does within most women on this planet.

Anger can be used for good when it moves us into a place of activity—good activity, activity for God. We need to become activists in the outworking of God’s plan for our world—the Divine New Order. We need to become those change agents, and you cannot just sit around talking about it. I fondly recall the story of when Jesus met with two women who were prostitutes. He was very active in helping them bring about a change in their lives. He did not just talk it; He walked it too, and that is what an activist does. In order to help bring about a healing for this world, the first thing a true activist has to do is bring about a healing within himself or herself and then help bring healing to other people. Healing and growth, which go hand-in-hand, are ongoing processes.

The people of Urantia (Earth) need the Universal Father circuits as much as they need the Mother circuits—the Infinite Spirit and Universe Mother Spirit circuitry. We all need them both, and part of our healing is to come into a connection and balance with both. My intent is to continue to get this true healing, to be able to have the kind of mind that is in alignment with divine mind. Often I feel like I am too “human.” I want to be the highest human, the highest perfection that God is asking me to be. [Father-, Son-, and Mother-circuitry are introduced in The URANTIA Book and expanded upon in The Cosmic Family volumes.]

Jesus is the person who walked this planet as a beautiful and perfect example of what a perfected human can become on this world. He did have his human ups and downs, and The URANTIA Book talks about his struggles, though he did not struggle nearly like we do. Jesus had his human mind, and he had his divine mind. We know that we have divine mind within us through the Fragment of the Father, also referred to as the Thought Adjuster [as introduced in The URANTIA Book]. We have our human mind too, and my intent is to have my human mind become more attuned to the divine Father Fragment, to truly be cooperative every moment with my Thought Adjuster, so that all of my responses to individuals in my life are responses rather than reactions. I do this by seeking God’s will in all things, rather than my will and agendas.

When we react, we get a little charge. If someone gets on our nerves or if someone gets upset with us, we have some emotionalism about it. Responding in true love to someone is being able to get out of our own agenda and to have an emotional aloofness, not having that sense of possession or ownership with that person nor being attached to a specific outcome that makes us feel better in some manner. That is why Jesus had such a positive impact with those people he came in contact with who were open and responsive to his gifts of ministry. He did not have an attachment to them; he just loved them and could discern immediately whether he needed to use his Father circuits with them or his Mother circuitry. He may have needed to treat them gently, as he did with the women I referred to previously. Or he may have spoken very strongly and confronted, as he often did with those particular Pharisees and Sadducees who were deceptive when he confronted them about their hypocrisy.

For each one of us, in our healing process that is ongoing (it is really our ascension process), it truly is a personal thing, and my process is not going to be yours; we are each different. You should never want to try to make your process like someone else’s because then you are denying your individuality and who you are. In order for our planet to heal, a unity (not uniformity) needs to happen on a global level, but in order for us to begin to feel that union with others—that union of souls within our uniqueness and our diversity—we must realize that what we all have in common is the need to heal, and that it is going to be an ongoing process. We need to also realize that we all have the same First Source, and we all have the same destiny to one day be fully embraced by that First Source of All, the Universal Father.

I would like to close with a prayer that was written by an American Confederate soldier who was seriously disabled in the Civil War. This was taken from Michael Lerner’s book Choices In Healing. This soldier realized that though he may have a physical infirmity, he was truly being healed by God.